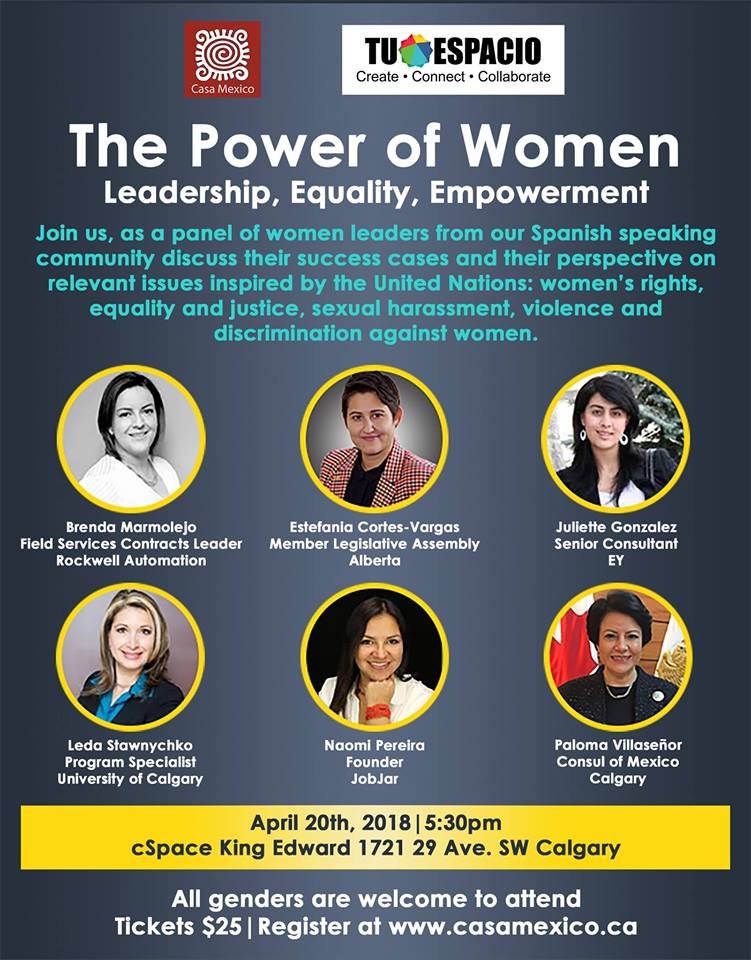 We are hosting a seminar with some leader women from our Spanish speaking community to be part of a panel to discuss their own success cases and also a perspective on relevant issues inspired by the United Nations regarding “women’s rights, equality and justice, sexual harassment, violence and discrimination against women that has captured headlines and public discourse, propelled by a rising determination for change”.

The seminar “Celebrating Women’s Success: Leadership & Empowerment”. “Celebrando el Exito de la Mujer: Liderazgo y Empoderamiento”, will bring a unique opportunity to hear different perspectives from women whom are working in different areas, and who will be sharing their own experience in their success journey; and also the challenges on the road.

This seminar will take place at our new home “TU ESPACIO” at the beautiful historical building of cSpace King Edward at the Study Theatre located at 1721 29 Ave. S.W., Calgary, Alberta, on the evening of Friday April 20, 2018 starting at 5:30pm. to 7:30 pm followed by a networking reception until 9:30pm. Light refreshments will provided and a cash bar will be available.

Estefania Cortes-Vargas
Member Legislative Assembly of Alberta
Strathcona-Sherwood Park MLA, Estefania Cortes-Vargas, was elected to the Legislative Assembly of Alberta on May 5, 2015. Prior to this, Cortes-Vargas worked as an educational assistant for Edmonton Public Schools for over four years and was enrolled in the social work program at MacEwan University.
At just six years old, Estefania and the Cortes-Vargas family immigrated to Canada from Colombia and settled in Sherwood Park. Cortes-Vargas has been an active volunteer in the community, supporting non-for-profit organizations such as the Multicultural Health Brokers Co-operative and coaching for a Tae Kwon Do program that serves families with children with disabilities. Currently Member Cortes-Vargas serves as deputy chair of the Special Standing Committee on Members’ Services. Cortes-Vargas previously served a member of the Select Special Ethics and Accountability Committee. On March 8, 2016, Cortes-Vargas was named government caucus whip, the youngest government whip in Alberta to date and most likely in Canada.”

Paloma Villaseñor
Consul of Mexico in Calgary
Consul Villaseñor recently arrived as the Consul of Mexico to Calgary. She holds a Bachelor’s Degree in Communication Sciences, a Master’s Degree in Public Resources Management and a PhD in Innovation and Social Responsibility. She has worked for more than 20 years in Mexico’s Federal Government. She served as Federal Representative for two terms and one as a Local Representative. In her last Federal Representation, she successfully promoted and encouraged the approval of a general law to protect and serve people within the autistic spectrum.

Brenda Marmolejo,
Field Services Contracts Leader at Rockwell Automation
Brenda Marmolejo leads and manages the delivery of the existing contract service portfolio for Western Canada in Rockwell Automation. She holds a Bachelor’s of Chemical Engineering from the Technological Institute of Monterrey in Mexico and a Master’s Degree in Quality and Safety from the University of Magdeburg in Germany. She is registered as a Professional Engineer in Alberta and member of Society of Women Engineers. Brenda is a board member of the Women’s Center of Calgary and if the founder of Osadia, a social enterprise committed to empower and support vulnerable communities around the world.

Leda Stawnychko
Program Specialist at Faculty of Nursing, University of Calgary.
Leda Stawnychko was born in Monterrey, Mexico. She immigrated to Canada in 1997 and spent about ten years managing international development programs where her language and negotiation skills were key to her success. Leda then pursued careers at the University of Calgary that would allow her to also follow her passion for learning and education. She has held management positions in the Provost’s Office, the Haskayne School of Business and the Cumming School of Medicine and is currently leading the design and development of a new graduate professional degree in the Faculty of Nursing. Leda completed a Bachelor of Arts degree in International Relations in 2011, a Master of Education degree in Post-Secondary Leadership in 2015, and is now completing doctorate studies also in the area of Leadership at the University of Calgary. She received training from the Justice Institute of British Columbia as a Negotiator and Mediator, and is currently in the final stages of obtaining her designation as a Qualified Mediator (QMed). In her free time, Leda volunteers for the Canadian International Women’s Association (CIWA) mentoring professional immigrant women as they integrate in their new Canadian professional lives. Her hope is to use her mediator’s training to also support low-income families and newcomers as they engage with Canada’s justice system. “Women helping women” is a strong foundational principle for Leda. She believes in education as the most effective empowering tool that enables women to advocate for themselves, and to engage as leaders in their social, political and private spheres. Leda describes herself first as a woman, and then also as a mother, wife, sister, daughter, aunt, and friend. Reading and traveling to exotic destinations are her favorite hobbies.

Juliette Gonzalez
Senior Consultant at Ernst & Young LLP.
Juliette came to Calgary in 2006 to attend an exchange program at the University of Calgary (U of C) for one term. She was then planning to return to her native Colombia to graduate. The future had a different path for her. Juliette made the U of C Women’s basketball team as a walk-on, which led her to decide to transfer to U of C to finish her undergrad. She then proceeded to complete a Master’s in Strategic Studies in 2011, and started to work with Stuart & Company Limited, a boutique private investment firm. She joined TransCanada Pipe Lines in 2013 based in Calgary. During her term with Trans Canada, Juliette travelled to Mexico, often working with the company’s Major Projects and Commercial groups as they built up what is now a 4-billion-dollar pipeline business in Mexico. Driven toward a career focused on management consulting, Juliette completed an MBA from the University of Calgary. She currently works as a Senior Consultant in the Advisory Practice for EY. Juliette enjoys giving back. She has participated in the Junior Achievement program as an Advisor and has been a fundraiser volunteer for the Alberta Cancer Foundation and the Canadian Association for Participatory Development. Juliette has volunteered in the boards of the Canadian Council of the Americas and the United Nations Association in Canada – Calgary Chapter. Currently, Juliette is a committee member of the EY Women Fast Forward Program – Women in the Workplace. This program strives to cultivate meaningful relationships with the next generation of female leaders in Calgary. Juliette believes that dreams do come true if you are willing to invest what it takes to get where you want to be. She is extremely grateful to have become a Canadian as she believes that Canada is a country where hard work and discipline can truly help women make their dreams come true.

Naomi Pereira
Founder at JobJar
Naomi, a generation Y, is a construction industry expert with over 10 years of experience and hundreds of projects in her portfolio. She is passionate about solving complex problems in her industry with the use of technology, she is JobJar’s visionary leader. Naomi has been nominated to various entrepreneurship and business awards, including by Alberta Women Entrepreneur for the “Upsurge award” in 2016, a finalist for 2017’s “innovation and entrepreneurship” award from Immigrant of distinction award and most recently Canadian Business Chicks “Women of inspiration” 2017. 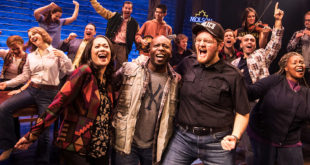 Broadway llega a Calgary / Come from away